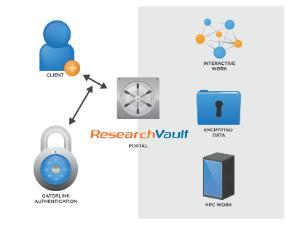 The general client computer is not trusted to hold ePHI data. Users can access HiPerGator-RV only through a secure SSL network connection after GatorLink authentication and all traffic will be carried encrypted to the HiPerGator-RV gateway system over all traversed networks. The gateway system provides further authentication through a secret key created for each user upon first use of the HiPerGator-RV system. The HiPerGator-RV gateway then establishes a secure, high-performance virtual desktop session with a VM running inside the vault. The system ensures that the researcher can use applications to analyze authorized data.

Interactive work on the data is done from VMs running on infrastructure inside the vault. The size of the VM can be controlled by the developers and researchers so that applications that need multiple cores or large amounts of memory have the resources to run efficiently. Very large workloads and complex, multi-task work flows can be run interactively or asynchronously on the HPC resources inside the enclave. The HPC resources have been configured to support high-performance access to the data storage system.

The initial configuration of the HiPerGator-RV system has 200 cores from Intel E5-2670v2 processors with 6.4 GB of RAM per core. It has a fast primary storage system connected by InfiniBand of 1.2 PetaByte and a 400 TeraByte secondary storage system that keeps the second copy as a replica of all user data. User data, all encrypted, is backed up daily to the tape robot.

The system configuration is very specialized and highly locked down. The configuration of the nodes is generated automatically and changes go through a rigorous process.

In order for the VM to perform efficient computation, it needs access to fast, secure storage. This is provided in the form of encrypted drives. The drive encryption keys are generated and manipulated in the same manner as the file keys. The user-VM encrypted channel is used to transmit such keys to the VM during the start-up sequence.

The disk encryption happens inside the VM, under control of the user that owns the VM, not the administrators of the system. The Controller utilizes widely available and tested disk encryption solutions, like BitLocker and LUKS, to handle the disk-level encryption.